BLOG TOUR: A Theater for Dreamers by Polly Samson 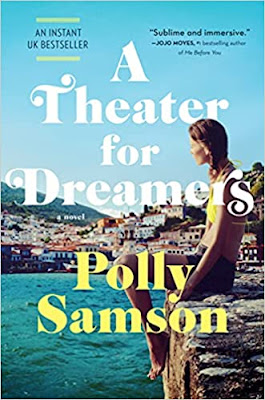 Title: A Theater for Dreamers
Author: Polly Samson
Published by: Algonquin Books
Released: May 11, 2021
Source: Review Copy from Publisher
Amazon
Synopsis: It’s 1960, and the world teeters on the edge of cultural, political, sexual, and artistic revolution. On the Greek island of Hydra, a proto-commune of poets, painters, and musicians revel in dreams at the feet of their unofficial leaders, the writers Charmian Clift and George Johnston, troubled queen and king of bohemia. At the center of this circle of misfit artists are the captivating and inscrutable Axel Jensen, his magnetic wife Marianne Ihlen, and a young Canadian ingenue poet named Leonard Cohen.
When eighteen-year-old Erica stumbles into their world, she’s fresh off the boat from London with nothing but a bundle of blank notebooks and a burning desire to leave home in the wake of her mother’s death. Among these artists, she will find an unraveling utopia where everything is tested—the nature of art, relationships, and her own innocence.
Intoxicating and immersive, A Theater for Dreamers is a spellbinding tour-de-force about the beauty between naïveté and cruelty, chaos and utopia, artist and muse—and about the wars waged between men and women on the battlegrounds of genius. Roiling with the heat of a Grecian summer, A Theater for Dreamers is, according to the Guardian, “a blissful piece of escapism” and “a surefire summer hit.” (Synopsis from Amazon)
My Thoughts: This was an interesting read and a captivating story. I loved that it took me to Hydra Island, Greece. It did such a good job of capturing the place and time that I felt like I was there. I could feel the warmth and beauty of the place and the other-worldliness of the people Erica found herself with. This isn't the kind of story that I read all the time, but I definitely enjoyed it.
I'm pretty sure my last ex-pat, artists kind of story I read was by Gertrude Stein, and I didn't like that one so much. It was also set in a different place. The time period and our cast of characters did not share the same kinds of ideas that I did, but I enjoyed reading their stories. I think this book did a great job of capturing a certain time and place.
A Theater for Dreamers was an interesting read and I'm glad I got to check it out. It had a great atmosphere and an interesting story.
Polly Samson is a writer of fiction and a lyricist. Her words have appeared on four number one albums, including Pink Floyd’s The Division Bell and David Gilmour’s On an Island. She has also worked as a journalist and in publishing, including two years as a columnist for the Sunday Times. Samson was made a fellow of the Royal Society of Literature in 2018. Her first novel, Out of the Picture, was shortlisted for the Author’s Club Award, and many of her stories, including those from her first collection Lying in Bed, have been read on Radio 4. A second collection of short stories, Perfect Lives, was a Book at Bedtime. She has written an introduction to a collection of Daphne du Maurier’s earliest stories and has been a judge for the Costa Book Awards. Her 2015 novel The Kindness was named a Book of the Year by both the Times and the Observer.
Thanks so much for checking out my Blog Tour Stop for A Theater for Dreamers by Polly Samson. Thanks so much to Algonquin Books and Polly Samson for giving me the opportunity to read the book and be a part of the tour. If this one sounds good to you, I'd definitely say give it a read.
Posted by ashleysgotbookcitement at 8:00 AM