My Blog has been very post light this week. I took a little bit of a break. But, I needed to share what I'm Reading Right Now! (even if it is on a Saturday) 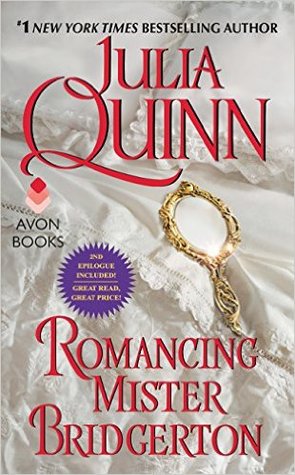 Romancing Mister Bridgerton (Bridgerton #4) by Julia Quinn -- This is Colin and Penelope's story which is one of the ones I've been looking forward too. Colin has always just seen Penelope as his sister's best friend, and not really anything more than that. Penelope has had a crush on Colin since the moment she laid eyes on him, but knew nothing would ever come of it. Now Colin is 33 and the pressure to marry is on from his mother. Penelope is 28, well on her way to being considered a true spinster.
A large part of this story centers around the identity of Lady Whistledown and a wager to unmask him/her. If you've seen the Netflix show Bridgerton, then you already know who the famous gossip columnist is. In this book and previous ones, it's kept much more under wraps. I think it would have been nice not to be spoiled by the show for who it was, because it would have been a much more fun and unexpected surprise.
I do wish this story was a little more special. Penelope and Colin are really fun characters, but their story isn't as charming as I want it to be. Colin is always described as being really jovial, joking, and a charmer, but he doesn't really feel like it in this story. It almost feels like a mask or something that he puts on. Sometimes he can be a bit obtuse. Also, it's taken him quite a long time to realize how great Penelope is, too long.
I do relate to Penelope in this, personality wise. She's a bit of an introvert who shows her true self to people she's close to.
I'm almost at the halfway mark. I'm definitely enjoying the story, but it doesn't have that special spark for me yet that previous books in the series have had.
And that's what I'm Reading Right Now! What are you reading this weekend?
Posted by ashleysgotbookcitement at 8:00 AM