What I'm Reading Right Now! is...
I'm on my third book for the Bookopoly Readathon/Game thing that I'm doing this month. I'm really enjoying the readathon, but I've had some bad luck when it comes to spinning and moving on the board. The first time I landed on a Forgot Your Book square and lost 100 points, and in this last spin, I landed in Reading Slump Jail. Luckily I rolled a double and got out, but still.
Also this week has been weird. As some of you may or may not know (or care), I've been a really big fan of The 100 television show on the CW. This is the Seventh and Final Season and it's been trash. Wednesday night's episode was very, very tough. I won't spoil anything, but if you know, you know. I'm so angry and disappointed what they decided to do with characters and the plot in general. It sucks. It sucks so much. I was so looking forward to this Final Season and they f'd it up. Not the actors, but the Executive Producer putting forth a story that makes no sense. He is the real villain. It's super frustrating. 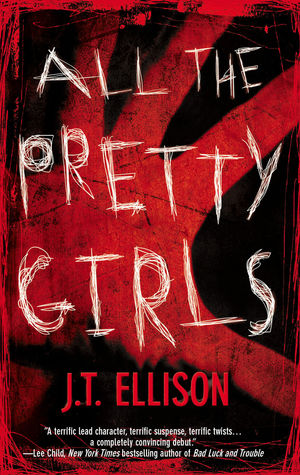 All the Pretty Girls (Taylor Jackson #1) by J.T. Ellison -- It has been a while since I've read a police procedural crime novel. I'm enjoying it so far.
One thing that I'm finding sort of confusing is that this is the first book in the Taylor Jackson Series, but it feels like I'm missing a tale that came before. I thought that characters would meet and start to form relationships in this first book, but nope, the relationships are already formed. It's very strange to me. Usually when you start a new series, one detective gets partnered with another detective, they come to depend on each other while solving the crime, there's danger, they fall in love. You get the beginning trajectory of their relationship. This book has already gone past that stage and I'm kinda annoyed that I didn't get to witness it. Having two people depend upon each other and fall in love is most times the most fun part of the story and I just feel like I missed it with this. Maybe that's just me.
This is very police procedural focused, I guess. Taylor Jackson is lead Homicide Detective and the serial killer known as the Southern Strangler has decided to commit a crime in her backyard (not literally, but in her jurisdiction) She gets drawn into the case. Her lover is an FBI profiler and he's working on the case. There's also another rapist Taylor is on the lookout for.
This is an older title, it was written in 2007. I think I came across it because I knew J.T. Ellison had been co-writing with a pretty big author recently and I wanted to check out her past stuff.
This is all right. I'm interested. We'll see what happens. I've just not read this genre in quite a while, so I'm have to reacclimatize.

So that's what I'm Reading Right Now! What are you Reading?