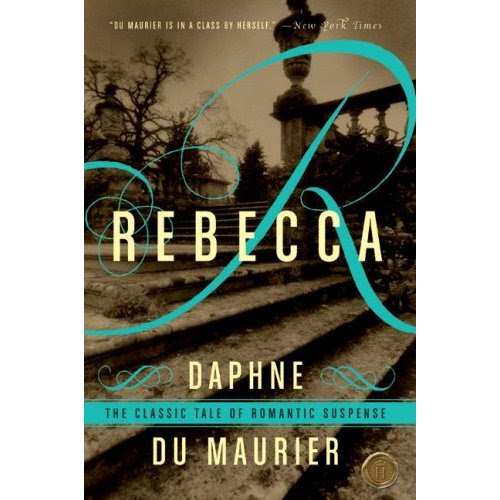 Title: Rebecca
Author: Daphne Du Maurier
Publisher: Harper
Released: Originally 1938, Reprinted 2006
Yes another review. You're probably thinking Ashley where are all these YA books you promised us. I'm terribly sorry. Rebecca by Daphne Du Maurier is another adult book. The reason why I read this book is because I'm currently taking a class called Film and Lit and this was the first book on the list. Interestingly enough Alfred Hitchcock made this into a movie, his first movie made in America no less.
A short synopsis: Rebecca is the first wife of Maxim De Winter who died in a horrific boating accident leaving him a broken man who must escape from his beloved home Manderley and all the memories it holds. Our narrator who is never given a name meets Maxim at a hotel and she falls in love with him and she helps him forget the darkness of his past. After a whirlwind courtship they marry and go to live in the beloved estate of Manderly. While there our narrator is constantly haunted and compared to the beautiful Rebecca, forced to deal with the creepy housekeeper Mrs. Danvers, and subjected to Maxim's fits of melancholy. The dead Rebecca has a haunting presence in the house and the narrator must find out the truth of Rebecca and her death.
My humble opinion of this book, I LOVED IT. When I first had to read it and realized it was kind of a classic, I was sure that I wouldn't enjoy it, but that proved not to be the case. The writing pulled me in and held me there with lots of twists and turns. I was never sure what was going to happen next. Finding out the truth of Rebecca made me want to finish the novel all the quicker. I enjoyed the narrator of the story with her wonderful imagination. And while reading I could feel the creepiness of the house and Mrs. Danvers. The language was also beautiful and very descriptive concerning Manderley. There wasn't really anything I didn't like about this book. If you haven't read it, you should definitely go and pick it up today and then watch the movie. This is one classic that is compulsively readable.
BOOKCITEMENT LEVEL 5/5
Posted by ashleysgotbookcitement at 12:35 AM No comments: Title: Feed
Author: Mira Grant
Publisher: Orbit Books
Released: 2010
Okay, now to get down to business. As the first book to be reviewed on my blog I feel Feed was the right choice. Feed tells the story of a brother and sister blogging team consisting of Georgia and Shaun Mason. Their story takes place in a world where cancer and the common cold has been cured but comes with the nasty side effect of zombieism. A virus called Kellis-Amberlee has been unleashed on the public at large infecting everyone with an inactive state of zombie that will be unleashed with their eventual  death. The zombies will never be truly defeated and will always be a threat to the surviving population. Georgia and Shaun Mason are members of the after the Rising generation and have learned to live with all the precautions and blood tests that are put in place to separate the infected from the non-infected. In the world of Feed, the news media has become distrusted and bloggers have risen to the status of where the public gets their news. Shaun, Georgia, and Buffy make up a blog news site and they are chosen for the groundbreaking job of being the first bloggers to personally follow and report on a presidential campaign for Senator Ryman. On the campaign trail they run into danger and sabotage with someone using zombies as a weapon to derail the senator's chances of winning the nomination and election. Shaun, Georgia, and Buffy enter into a race to uncover the truth and stay alive.
I enjoyed reading Feed. When I first picked up the book, my initial excitement was over the implied subject matter of zombies but on further reading it became apparent that zombies weren't the main focus. As a first time blogger, it was interesting to encounter a book where blogging was the main mode of information. Where the news media had lost the trust of the public and bloggers had taken up the task of reporting the real news. The book was also current to today on illustrating the hard road political candidates take in their goal to eventually becoming president of the United States.
Some aspects I enjoyed about the book were the action scenes involving the actual takedown of zombies and the feeling of a world where everyone is in danger of infection. Mira Grant did a good job of illustrating a world where no one was really safe. I also found it humorous how a popular name for children after the Rising was George or Georgia because of George Romero who became an accidental hero because of his movies like Night of the Living Dead, that showed the world the right and most effective way to kill a zombie, thus saving humanity. There were also fun references to Steve Irwin and Steve-o. The book was action packed and rarely encountered any slow spots.
Some things that I didn't like so much about Feed was the sort of melodramatic flair Georgia and Shaun had for exposing the truth. They also had a strange brother/sister relationship, being almost too devoted to each other. While all the descriptions of this after the Rising world was kind of cool to learn, it was almost put in places where it didn't make the most sense or maybe it was just too much of it. All in all I enjoyed reading this book and would recommend it to other readers who enjoy a zombie novel.
Feed is the first book in the Newsflesh Trilogy with the second book Deadline available now.
BOOKCITEMENT LEVEL: 4 (out of 5)
Posted by ashleysgotbookcitement at 9:38 PM 1 comment:

This idea of book blogging is new for me and I'm a little excited about starting it up. I've always loved books, even before I could read. I really enjoy reading any kind of YA books with a special emphasis on paranormal, dystopian, and fantasy.
So maybe I should tell how this idea came about. One day while surfing youtube.com on my phone I found these little videos titled IMM or In My Mailbox. These videos posted by various people showed books, books, and more books. I got excited watching these videos and the books these people were recieving. It actually made me a little jealous of all the cool books they had and made me want to read them. I started watching IMM after IMM and had some favorite channels. thestorysiren and reading teen were the IMM's that got me hooked and it was icing on the cake to learn that thestorysiren was the originator for the cool in my mailbox idea. I then started thinking that this blogging/book reviewing idea is something that I could do. So my goal of this blog is to share books that I have read and my opinions of them and hopefully bring enjoyment over the love of books to someone or anyone really. This book blogging community looks like a pretty awesome place to be a part of, so hopefully this whole thing works out. I'm going to do my best to post book reviews, keep the blog posted on what I'm reading, and give a glimpse of my excitement level to books I have read.
On an unrelated note thinking up a blog name is hard! A lot of the cool ones were taken already, but I'm happy with the name I eventually settled on, seeing how it's book and excitement combined!! Ha, I'm just so clever... haha.
Posted by ashleysgotbookcitement at 9:51 PM No comments: