I had a pretty good reading month in March. It probably helped that I read a bunch of comics, that really upped my number. I think the books helped me not freak out about the world as much. It helped take my mind off of it I guess.
So, here's everything I read in March!

The Remaking by Clay McLeod Chapman -- I really liked the idea of this, but I wish the story had been executed a little differently. The idea was so cool though. And that cover!! BOOKCITEMENT LEVEL 3.3/5

Unnatural, Volume 1: Awakening by Mirka Andolfo -- Awesome artwork. This comic is not safe for public reading though. The story was pretty interesting too.
BOOKCITEMENT LEVEL 4/5

A Good Idea by Cristina Moracho -- I felt like I couldn't look away from this book. The writing really grabbed me. The story was interesting. There was a lot of drug use and casual sex, which made me think that maybe it shouldn't have been a YA book. I also found it kind of weird that this book seems to be based on a real life case, but the author never mentions that fact anywhere in the book. Don't look for the case though until you've finished the book, because it will spoil some stuff.
BOOKCITEMENT LEVEL 3.7/5

Unnatural, Volume 2: The Hunt by Mirka Andolfo -- This second volume was a lot different from the first volume. I found it kind of confusing. I wish more time had been spent explaining just what was going on. The art was still top notch though.
BOOKCITEMENT LEVEL 3.5/5

Nocturna (#1) by Maya Motayne -- This was a lot of fun! I liked this. It's pretty much a self-contained story, so I'm curious to see what will happen in the sequel. There were a lot of bad decisions made though, I will say that.
BOOKCITEMENT LEVEL 4.2/5

Unnatural, Volume 3: Rebirth by Mirka Andolfo -- This was the last volume, so I finished the series. Hooray! I liked this, but I still was pretty confused. Everything just went by so fast, too fast. I think this series needed to be longer so things would have been fleshed out and explained better. Art still great.
BOOKCITEMENT LEVEL 3.2/5

Bone Crossed (Mercy Thompson #4) by Patricia Briggs -- I love this series! Every book I've read in this series has just been so fun to read. I feel like these characters, I know them. Bone Crossed took a direction that I didn't expect. I thought it was going to be much more focused on the Vampire Seethe of Marsilia, but it wasn't exactly. It was really good and I can't wait to continue with the series.
BOOKCITEMENT LEVEL 4.3/5

Crosswind, Volume 1 by Cat Staggs and Gail Simone -- This was fun. It has a really unique art style that I enjoy. Very violent. It did show almost every guy in this comic as a sexist jerk, which I didn't really agree with. I also didn't expect the ending.
BOOKCITEMENT LEVEL 3.7/5

One Way (#1) by S.J. Morden -- This was more science then it was fiction, and I tend to like more fiction in my science fiction. The science parts just go right over my head, which is what happened with this book. When it got to the story bits, I did enjoy it. It had good writing. I'm definitely interested in seeing what happens in the next book.
BOOKCITEMENT LEVEL 3.5/5

By Night, Volume 1 by John Allison, Christine Larsen, and Sarah Stern -- This was fun and quick. This volume ended before anything was really explained. The art was cute. It also had a great HP reference.
BOOKCITEMENT LEVEL 3.5/5

FAVORITE BOOK(S) OF THE MONTH 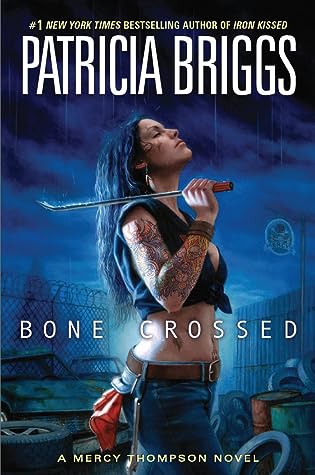 My favorite reads for March were Nocturna by Maya Motayne and Bone Crossed (Mercy Thompson #4) by Patricia Briggs. Nocturna was a lot of fun and I'm excited to see where the sequel goes. Bone Crossed was just another great Mercy Thompson adventure. I love that series.

And that's everything I read in March 2020. How did your reading go for the month?