I'm really excited to be a part of the Blog Tour for The Darwin Affair by Tim Mason! I received a free copy for honest review from the publisher. Thanks so much to Algonquin Books and Tim Mason for letting me be a part of the tour. 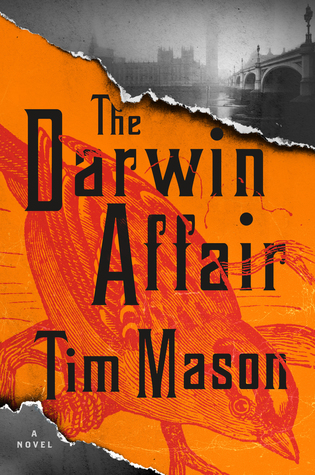 Synopsis: Get ready for one of the most inventive and entertaining novels of 2019—an edge-of-your-seat Victorian-era thriller, where the controversial publication On the Origin of Species sets off a string of unspeakable crimes.
London, June 1860: When an assassination attempt is made on Queen Victoria, and a petty thief is gruesomely murdered moments later—and only a block away—Chief Detective Inspector Charles Field quickly surmises that these crimes are connected to an even more sinister plot. Was Victoria really the assassin’s target? Are those closest to the Crown hiding something? And who is the shadowy figure witnesses describe as having lifeless, coal-black eyes?Soon, Field’s investigation exposes a shocking conspiracy in which the publication of Charles Darwin’s controversial On the Origin of Species sets off a string of murders, arson, kidnapping, and the pursuit of a madman named the Chorister. As the investigation takes Field from the dangerous alleyways of London to the hallowed halls of Oxford, the list of possible conspirators grows, and the body count escalates. And as he edges closer to the Chorister, he uncovers dark secrets that were meant to remain forever hidden.
Tim Mason has created a rousing page-turner that both Charles Dickens and Sir Arthur Conan Doyle would relish and envy. (Synopsis from Goodreads)

My Thoughts: This was a fun historical mystery thriller. It was quite a ride. There was a lot going on with it. There were tons of historical figures showing up, making appearances. The mystery element of it was really interesting. I was always on my toes, waiting to see where Detective Inspector Charles Field's investigation would take him next.
This book has one of the most awful people villains I've read in a while, the Chorister. He is one scary guy.
I did think it was interesting how this book managed to incorporate On the Origin of the Species by Charles Darwin. I enjoyed it.
If Historical Mystery Thrillers are your thing, I'd definitely recommend giving this a read. It was quite the adventure, quite the case.

Tim Mason is a playwright whose work has been produced in New York and throughout the world. Among the awards he has received are a Kennedy Center Award, the Hollywood Drama-Logue Award, a fellowship from the National Endowment for the Arts, and a Rockefeller Foundation grant. In addition to his dramatic plays, he wrote the book for Dr. Seuss’s How the Grinch Stole Christmas! The Musical, which had two seasons on Broadway and tours nationally every year. He is the author of the young adult novel The Last Synapsid. The Darwin Affair is his first adult novel.

Thank you for stopping by my Blog Tour Stop for The Darwin Affair by Tim Mason. Thanks so much to Algonquin Books and Tim Mason for letting me be a part of it.
Posted by ashleysgotbookcitement at 8:00 AM