BLOG TOUR: She Gets That From Me by Robin Wells

I am very excited to be a part of the Blog Tour for She Gets That From Me by Robin Wells. I was provided with an e-arc for honest review from the publisher. Thank you so much to Berkley and Robin Wells for letting me be a part of this. 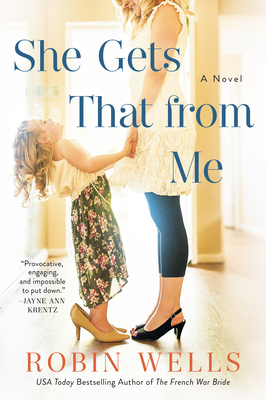 Title: She Gets That From Me
Author: Robin Wells
Published by: Berkley
Released: September 22, 2020
Source: e-arc from publisher for review
Goodreads   Amazon

Synopsis: Quinn never expected that her best friend’s courageous decision to be a single mother by choice would end up transforming her own life in this poignant novel from USA Today bestselling author Robin Wells.
When Quinn Langston’s best friend unexpectedly passes away, Quinn embraces Brooke’s three-year-old daughter Lily and elderly grandmother Margaret as the family she’s always wanted. She’ll do whatever it takes to help them heal, but she didn’t anticipate Lily’s biological father would be part of the plan. Margaret is old-fashioned, though, and she has no compunction about finding a way to reach Lily’s dad, a sperm donor. After all, he's a blood relative, and she believes family should raise family.Zack Bradley doesn't know what to expect when he finds out he has a child. Sperm donors don't usually get to meet their...well, he's not sure what to call Lily yet, but he’s certain he wants to get to know her. There’s just one of problem: he’s about to move to Seattle with his wife, Jessica, who’s undergone multiple infertility treatments, desperately wants a family of her own and can’t stand the idea of Zack playing daddy to another woman’s child.
Together, they’ll all learn that the human heart is infinitely expandable and there are many different roads to family. (Synopsis from Goodreads)

My Thoughts: There's a lot going on here, but I enjoyed it. It deals with grief, infertility, and just what makes a family. It's a very sweet and heartwarming book. I really liked how all these people came together and wanted the best for this little girl. It's a make-you-feel-good story.
There were a lot of different pieces going on in this one. There's an unexpected death, a friend jumping in to care for another woman's child, an elderly lady that has strong opinions, a sperm donor who is told of his child, and a marriage that has troubles. There's a lot. A lot. I liked how everything was done though. It was a book that put some warmth in my heart.
I would criticize the idea of a romance between someone who is married. I never, ever like that. Even if the wife is awful, it doesn't make it okay. I wouldn't say that anything really happens, but there's the suggestion of it. I would rather Zack had just been single.
I enjoyed this. Robin Wells tells a very sweet story of people coming together to mourn a loved one and raise her little girl. It really hits home how family isn't all just blood. If you're looking for a Women's Fiction to read, I'd definitely say give this one a try.

Robin Wells was an advertising and public relations executive before becoming a full-time writer. She always dreamed of writing novels--a dream inspired by a grandmother who told "hot tales" and parents who were both librarians. Her books have won the RWA Golden Heart, two National Readers' Choice Awards, the HOLT Medallion, and numerous other awards. She now lives in Texas with her husband, but will always be a Louisiana girl at heart.

Thanks for stopping by my Blog Tour Stop for She Gets That From Me by Robin Wells. Thanks so much to Berkley and Robin Wells for letting me be a part of the tour!
Posted by ashleysgotbookcitement at 8:00 AM