BLOG TOUR: Been There, Married That by Gigi Levangie

I'm really excited to be a part of the Blog Tour for Been There, Married That by Gigi Levangie. I was sent a free e-arc for honest review from the publisher. Thanks so much to St. Martin's Press and Gigi Levangie for letting me be a part of this fun tour!

Synopsis: A hilarious new novel full of Hollywood glitz, glamour, and scandal.
When he changes the locks, she changes the rules.Agnes Murphy Nash is the perfect Hollywood wife – she has the right friends, the right clothes, and even a side career of her own as a writer. Her husband Trevor is a bigshot producer, and from the outside it looks like they’re living a picture-perfect celebrity life, complete with tennis tournaments and lavish parties.But the job description of a Hollywood wife doesn’t cover divorce, which is the way Agnes’ life is headed after she comes home one day to find her credit cards cancelled and the security passwords to get into her enormous LA home changed. Oh, and there’s a guy there whose job it is to tase her if she tries to enter…which she does. Needless to say, Agnes’ husband is dead set on making sure she loses big time, but Agnes isn’t the type to just lie down and take it. In a world of fremenies and hot nannies, personal psychics and “skinny” jello shots, Agnes may be losing her husband, but could that mean getting her own life back?

Been There, Married That is a drop-dead hilarious battle of wills that will make you laugh out loud, cringe, and keep turning the pages to see what crazy disaster will happen to Agnes next…and how she’ll rise from the ashes. (Synopsis from Goodreads)

My Thoughts: Been There, Married That is definitely over the top. The characters are very exaggerated. The situations are pushed to the limit. It definitely has its share of funny, ridiculous, and crazy scenes. I mostly liked this book. It was a fun read. It delivered on what was advertised.
I don't know if it will be for everyone. The characters are kind of crappy people. They are vast exaggerations who kind of try too hard. When you don't want to punch them in the face, they can be funny.
I enjoyed Been There, Married That and I'm glad that I got to read it. It was an experience. 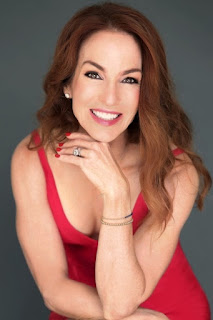 Gigi Levangie is the author of six prior novels, including The After Wife and the New York Times bestseller The Starter Wife, which was adapted as a miniseries for USA Network.She is the original writer of the screenplay for Stepmom and has written for Vogue, Harper's Bazaar, Glamour, and other publications. Levangie lives in Los Angeles.

Thank you for stopping by my Blog Tour Stop for Been There, Married That by Gigi Levangie! Thanks to St. Martin's Press and the author for letting me be a part of this tour.
Posted by ashleysgotbookcitement at 8:00 AM