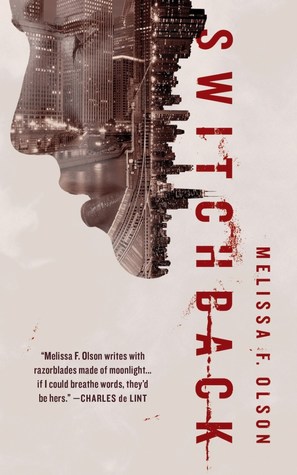 Title: Switchback (Nightshades #2)
Author: Melissa F. Olson
Published by: Tor (Tom Doherty Associates / Tor.com)
Released: 2017
Source: Library
Synopsis: The Bureau of Preternatural Investigations returns in the sequel to Melissa F. Olson's Nightshades.
Three weeks after the events of Nightshades, things are finally beginning to settle for the Chicago branch of the BPI, but the brief respite from the horror of the previous few weeks was never destined to last.
The team gets a call from Switch Creek, WI, where a young man has been arrested on suspicion of being a shade.
The suspect is held overnight, pending DNA testing, but seemingly escapes in a terrifying and bloody massacre. But is there more to the jailbreak than a simple quest for freedom? (Synopsis from Goodreads)
My Thoughts: This is the second book in the Nightshades Trilogy. I really enjoy this series. It's about a special unit of the FBI who investigate vampire related crimes. It has just been discovered that vampires exist, so the world is scrambling to process this. The task force also has a secret vampire on their team named Lindy.
This story takes up maybe two months after the events in the first book. Hector is still on the wind and Lindy is looking for him. I will admit that I didn't remember everything that happened in Book One. I shouldn't have waited so long before reading the second installment. (future me chiming in: I still haven't read the third book, so I obviously don't listen to my own advice at all haha).
I really enjoy the special investigative unit/police procedural aspect to this story. I think it does a really good balance between the paranormal and the real world.
It has a very gritty feel to it, which works well for the story.
It was very quick and fast-paced. There really weren't any slow spots or boring bits. I was always interested to see what was going to happen next. It had a very interesting crime and I wasn't sure where it was going to go.
This does end on a cliffhanger, so I'm going to need to read Book 3 pronto. (Future me laughs and laughs at this statement because I still haven't done it).
Switchblade was a great follow-up to Nightshade. I really like this world and feel. I'm excited to see what happens next.

Beware the Creatures of the Night!