BLOG TOUR: The Last to See Her by Courtney Evan Tate 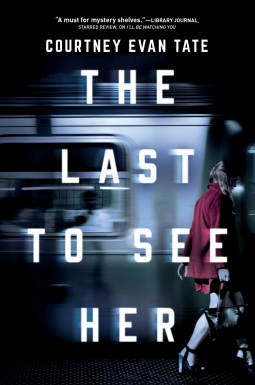 Title: The Last to See Her
Author: Courtney Evan Tate
Published by: MIRA
Released: December 15, 2020
Source: Review Copy from Publisher
Goodreads    Amazon
Synopsis: A woman disappears into the dark city night…
Gen is on the verge of a divorce from her cheating husband. When her sister, Meg, has a convention to attend in the Big Apple, she invites Gen along to celebrate her newly found freedom. But the perfect sisters’ getaway quickly goes awry when a tipsy Gen defiantly throws her wedding ring off the hotel room’s balcony. Then, wanting some fresh air, she decides to take a late-evening walk alone and vanishes without a trace.
The investigation that follows uncovers secrets—and betrayals—between sisters and spouses that will twist the truth in on itself until nothing is clear.
What really happened to Gen and who, besides Meg, was the last to see her? (Synopsis from Goodreads)
My Thoughts: I love a mystery and The Last to See Her was definitely one that kept me on my toes. I found the whole story really engaging and entertaining. Meg had a lot of secrets. It seems like that happens a lot with missing person cases, just when you think everything is straightforward, a twist comes to smack you in the face.
I also like the sister aspect in this one. It adds a nice family element to the story. And by nice, I don't exactly mean good times, it just adds a little bit extra to it. You're supposed to know a lot about your family, but what happens when you find out they aren't who you have built up in your head?
I really enjoy Courtney Evan Tate's writing style. I think she does a good job of spinning a tale. I'm always waiting for the next shoe to drop and the big reveal.
I really enjoyed this domestic thriller mystery from beginning to end. It was a great way to spend my time. I'd definitely recommend giving it a read. Trying to figure out what's the truth, who-done-it, and just what is really going on is a lot of fun.
Courtney Evan Tate is the nom de plume (and darker side) of Courtney Cole, the New York Times and USA Today bestselling author of the Beautifully Broken series and the Nocte Trilogy, among other fiction. She spends her days dreaming of new characters and story lines and surprising plot twists, and writing them beneath rustling palm trees in Florida.
Thank you for checking out my Blog Tour Stop for The Last to See Her by Courtney Evan Tate. Thanks so much to MIRA and Courtney Evan Tate for letting me be a part of the tour. If you're looking for a good Domestic Thriller Mystery, I'd say give this one a shot.
Posted by ashleysgotbookcitement at 8:00 AM