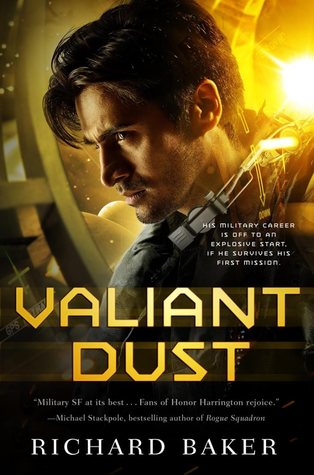 Valiant Dust  by Richard Baker --
I've got less than 100 pages to go with this one and I'm just feeling okay about it. I thought this was going to be a more exciting sci-fi. That it was going to be more of an adventure with a rag tag crew. I think that was my fault. This is classed as a military sci-fi, and that's probably an important thing to note, because that is what it is. It's got a lot of politics, military strategy. I mean, it does have some action scenes, but it just doesn't have the punch that I was looking for.
The beginning of the book was a little dull in how it did its world building. It was a lot of explanation instead of showing, very wordy. Our main character Sikander North doesn't really have much of a personality. I guess he has the personality you expect of an enlisted man. He's stoic, follows orders, thinks fast on his feet, but he's just not that exciting of a main character to follow.
I don't want to make out like I don't like this book, I was just expecting something with more pizazz, something a little more fun. It's interesting enough, but it's just not very exciting.
What I hope to Read Next!

The Book of Koli (#1) by M.R. Carey--
I don't know a whole lot about this one, but I think it has weird plants that can kill you vibes. I'm excited for it. Even though I've never read anything by this author before, I know they wrote The Girl With All the Gifts, which is a book that I've been meaning to read for the longest time.
I definitely think I will be reading this one Friday (the day this is post is up) and into the weekend.
So that's what I'm Reading Right Now! What are you reading? Also, has anyone else watched Dark on Netflix? I just finished Season 2 and I'm into it. It's so complicated and confusing and I don't even know what to think. I'm pumped to start Season 3. If you haven't seen it, I won't spoil anything. I'll just say that it's about this strange town called Winden and boys are disappearing. That little synopsis barely scratches the surface, but you'll find out more if you watch it. It's also in German, so you can either watch the English Dub or read the subtitles. I like to read the subtitles because I like hearing what the actors actually sound like. A lot of times with voice dubs, the way they say some of the lines just doesn't do justice to how the character actually delivered them.
Posted by ashleysgotbookcitement at 8:00 AM