BLOG POST: The Lightest Object in the Universe by Kimi Eisele

I'm very excited to be a part of the Blog Tour for The Lightest Object in the Universe by Kimi Eisele. I received a free copy for honest review from the publisher. Thanks so much to Algonquin Books and Kimi Eisele for letting me be a part of the tour! 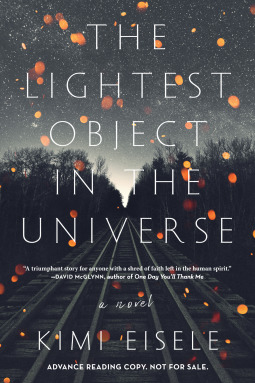 Synopsis: If the grid went down, how would you find someone on the other side of the country? How would you find hope?
After a global economic collapse and failure of the electrical grid, amid escalating chaos, Carson, a high school teacher of history who sees history bearing out its lessons all around him, heads west on foot toward Beatrix, a woman he met and fell hard for during a chance visit to his school. Working his way along a cross-country railroad line, he encounters lost souls, clever opportunists, and those who believe they’ll be delivered from hardship if they can find their way to the evangelical preacher Jonathan Blue, who is broadcasting on all the airwaves countrywide. Meanwhile, on the other side of the country, Beatrix and her neighbors turn to one another for food, water, and solace, and begin to construct the kind of cooperative community that suggests the end could, in fact, be a promising beginning.But between Beatrix and Carson lie 3,000 miles. With no internet or phone or postal service, can they find their way back to each other, and what will be left of their world when they do? The answers may lie with fifteen-year-old Rosie Santos, who travels reluctantly with her grandmother to Jonathan Blue, finding her voice and making choices that could ultimately decide the fate of the cross-country lovers.
The Lightest Object in the Universe is a story about reliance and adaptation, a testament to the power of community and a chronicle of moving on after catastrophic loss, illustrating that even in the worst of times, our best traits, borne of necessity, can begin to emerge. (Synopsis from Goodreads)

My Thoughts: I love post-apocalyptic books. I always love seeing different imaginings as to how people would deal with catastrophes. They are stories about people, resilience, and the thought of what a person will do to survive. I will admit, it's been a little weird to read a post-apocalypse book while in the midst of a pandemic, but this stupid pandemic has been bringing me down, and I need some escapist stories.
I enjoyed Carson's story. I liked getting to see all the people that he would meet and the situations that he found himself in. He interacted with a lot of different people along the tracks.
It was interesting seeing all these people journey to Jonathan Blue. He who controls the radio does have the power when the technology grid disappears.
I enjoyed this story. It was interesting to read. I loved the cover and I liked getting lost in a fictional catastrophe.

Kimi Eisele is a writer and multidisciplinary artist. Her writing has appeared in Guernica, Longreads, Orion Magazine, High Country News, and elsewhere. She holds a master’s degree in geography from the University of Arizona, where in 1998 she founded You Are Here: The Journal of Creative Geography. She has received grants from the Arts Foundation of Southern Arizona, the Arizona Commission on the Arts, the Kresge Foundation, and the National Endowment for the Arts. She lives in Tucson and works for the Southwest Folklife Alliance. This is her first novel.

Thank you for stopping by my Blog Tour Stop for The Lightest Object in the Universe by Kimi Eisele. Thanks so much to Algonquin Books and Kimi Eisele for letting me be a part of the tour! I had fun.
Posted by ashleysgotbookcitement at 8:00 AM